2nd December 2008 - It's Beginning to Look A Lot Like Christmas 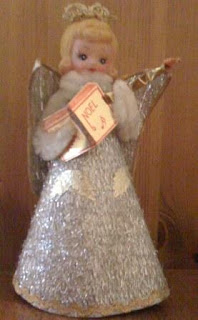 It’s definitely beginning to look a lot like Christmas in the 21st Century Household. There are presents waiting to be wrapped, glorious red breasted robins at the bird feeder and a sense of excitement in the air. Okay, there are decorations strewn just about everywhere and I’ve only written one Christmas card, but it is starting to take shape.

Yesterday night we retrieved the Christmas decorations from the attic, which was quite a job in itself. Due to the rather chaotic year we have had, boxes got put up in the attic in a bit of a rush. This was further complicated by the fact that the attic was not boarded, so we had to balance everything between the roof struts. (We intend to board the attic, it is just taking a while to organise!) Thankfully the 21st Century Husband and Teenager managed to find everything, picking their way carefully between the beams – despite one breathless moment when I thought we had lost the most important Christmas ornament of all.

I try not to be put too much importance on material things, but this one particular decoration means the world to me. It is an angel, purchased by my Dad when I was two years old. He brought it home and gave it to my Mom, saying “I bought this for April, our little angel.” Of course I was too young to remember that actual day, but Mom told me the story when I was a little girl. Back then, the angel seemed almost magic to me. In fact I was so taken with her that when I bought my first Christmas present for my Mom and Dad it was an angel shaped candle not unlike our treetop angel. I still have them both (we never lit the angel candle!), and my treetop angel has been on nearly every Christmas tree I have ever had – Mom and Dad brought her over for me when I moved to England.

Anyway, after a little while I did find my angel and tonight we assembled the first of the trees. I like having artificial trees. Growing up in Canada, the importance of not cutting down trees for Christmas decorations was a big issue and I’ve always carried that with me. I know you can buy ones with roots on them, but so many have just been cut down without them. Plus the ones with roots rarely survive when replanted due to the extremes of temperature they are subject to. It’s one of my big things. Funnily enough, we did have a couple real trees the first years I was in England (I was over-ruled!), but our cats used to go mad with the smell and try to climb them. After finding not a partridge in our pear tree, but rather a cat in our Christmas tree on more than one occasion (this was usually followed by the collapse of the aforementioned tree), we went back to the artificial variety.

So tomorrow we will begin to decorate the first tree. It’s the one in our living room, the one the angel will go on. I have photographs of the 21st Century Teenager putting the angel on top of the tree every year since he was two. Even when I had to lift him up so he could reach, he managed it. It won’t be a problem this year though. Although last year’s photograph shows him reaching above his head to place the angel, it became apparent last night that this year he will be reaching down to do it! He has grown over six inches in the last twelve months and even at six foot three inches tall shows no signs of stopping. It really brought home to me how much he is growing up.

I suppose that is why the holidays, and particularly Christmas, are often so bittersweet. Of course there is the bittersweet story at the heart of it, the baby Jesus born to save the world in a stable in Bethlehem, the baby who would become the man who took on the sins of the whole world in order to save us. But there is also the bittersweet nature of our own lives – the incredible joys, the heartbreaking sorrows, the myriad of moments that make up our existence. Christmastime brings all those memories back to us. The most important thing we can do is to choose to concentrate on the really wonderful memories. Of course we need to honour and acknowledge the sorrows we all share but it is more important to remember the really wonderful Christmas Days. We need to concentrate on the positive – our child’s first Christmas, or the first time we cooked dinner for our own parents in our own home instead of the other way around - and use the joy that gives us to root ourselves firmly in the now, making new and wonderful memories for ourselves, our families and friends.

I hope it is beginning to look – and feel – a lot like Christmas (or whatever joyful holiday you celebrate at this time of year) in your home too.
Posted by April J Harris at 12:45 pm