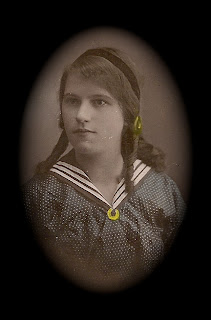 When I was a little girl, St Patrick’s Day was a very big deal in our house. It was considered to be something very special and it meant a lot to us all. The leprechauns would leave me something by my pillow on the morning of every St Patrick’s Day. Sometimes it was candies, sometimes it was a trinket and one year it was even a beautiful pincushion in the shape of a lady (which had actually belonged to my maternal Grandma but I didn’t find that out until much later). I still have it in my sewing box all these years later.

We always exchanged cards in my family on St Patrick’s Day. We also wore green and had some sort of a treat to commemorate the day. The best time was when my Dad brought home amazing shamrock shaped cookies; the worst was when I tried to make soda bread which turned out bearing more resemblance to the Blarney Stone than to bread! But whatever was on the menu, St Patrick’s Day was always a special day indeed. It was a day for remembering who we we were and where we came from.

You see, my paternal Grandmother, Mary, immigrated from Ireland to Canada in the early 1900’s. She was still only a teenager when she left her home and family to travel with a group of girls to Canada. These girls were escorted by a gentleman who owned a mill in a place called Galt, and they were seeking a better life in the new world.

I immigrated to England in the 1980’s, the days of airplanes and fast cars and “it’s a small world after all”. If I was scared when I left Canada, Mary must have been petrified. When she left Ireland in the first part of the twentieth century, it took weeks to get to Canada, by arduous sea crossing. She wore a locket around her neck, the same one I am wearing today. In it are photographs of her mother and father, who she probably expected never to see again.

Mary worked in the mill for several years, during which time she met my Grandfather. He told me that she ran into him on roller skates and that it was love at first sight. Where on earth she found roller skates in that day and age I have no idea, but I’m heartily glad she did.

As it happened, Mary did travel back to Ireland once, in a very small plane back in the days before commercial flights were the norm, to visit her dying father. But other than that she never set foot in Ireland again, nor did her parents ever visit the new world she had moved to.

Now my grandparents and my parents are gone, the mill Mary worked in is a ruin, a national historic sight in Cambridge (Galt was re-named in the 1970’s), and I live closer to where Mary came from than any other member of my family ever has.

Since I have lived in England I have always found St Patrick’s Day a bit disappointing. Yes, there are parades, but never nearby and nothing to the scale of the ones in New York or Chicago. Celebrating here seems to have a lot more to do with beer and drinking too much than the fun we used to have when I was little.

I had resolved to make cookies shaped like shamrocks this year, but I was too busy, and a last minute trip to various supermarkets and bakeries in the hopes of finding anything delicious with a shamrock on it was totally fruitless. Previous years have been much the same. People here just don’t celebrate St Patrick’s Day like they do in North America.

I must admit I do miss my parents today. Holidays, particularly ones that are not celebrated by everyone else, really bring their absence into sharp focus. Since my parents and my Aunt died I have not had a St Patrick’s Day card, so I was delighted to receive one from a cousin this year. It really made me smile, but it is the only decoration I have up to honour the day and as I sit here not wearing green (I don’t seem to have anything green anymore) I feel a bit like I am letting the side down. Although I did kiss the Blarney Stone last year so that has to count for something!

Oh well, la plus que ça change, la plus qu’il reste la même - or not as the case may be. I’m still a quarter Irish, and very proud to be so, still the daughter of a first generation Canadian and the grand-daughter of a very brave girl indeed. Thanks for being so brave, Grandma. I (along with at least two dozen other people) wouldn’t be here without what you did.
Posted by April J Harris at 4:29 pm