Having the Builders In 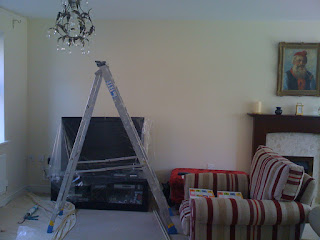 As I am writing this, the builders are attempting to fix a loose floor board in the master bedroom. It’s been an irritation ever since we moved in, located as it is directly where the 21st Century Husband has to step when he gets out of bed. It makes the most annoying squeak and has been driving us both crazy for ages. Finding the source of this squeak is proving very difficult and the noise from upstairs has me seriously worried the builders may be coming downstairs by a rather unorthodox route - and by this I mean through the ceiling - if they are not careful. Hammering, sawing, banging - it’s making me very nervous indeed.

We’ve had quite a few settlement issues in this house actually - and by settlement I mean actual physical movement of the bricks and mortar - so the company who built our house agreed to send some chaps to sort it out. There are some plaster problems where the walls join the ceiling and a few rather alarming cracks in the lounge and dining room, all of which are being fixed as I write this. The staircase has also settled by about a quarter of an inch, so there is a builder repairing that now as well. A quarter of an inch doesn’t sound like much, but on a staircase, it’s like a mini San Andreas fault and not an easy thing to repair.

So not only are we without curtains in two major rooms, but this rather unsettling environment is going to go on until tomorrow lunchtime. I’m not terribly good with this kind of chaos. It’s usually pretty quiet around here during the day, so it is quite disconcerting to happen upon someone with a saw, paintbrush or plastering equipment every time I turn around. Thankfully they are very nice chaps, extremely thorough, and visibly and verbally not impressed that their colleagues did not do the job properly first time round. In fact, they are actually fixing things I had not even noticed!

It’s going to be great when it is all done, and will mean that we can finally start decorating. It will be so nice to get things freshened up around here. You have to leave the “builders emulsion” (a light, non-vinyl paint with a high chalk content in a terribly mundane shade of beige) on the walls for twelve months to let everything dry out. We’ve been here fifteen months now and all that has been holding us back are the things that are being fixed today. I’m itching to start buying tester pots of paint and get going on things.

In the meantime, I’m going to continue working away here in the kitchen, which seems to be the only place that no one else is rushing around in. I’ve just been informed they have found the source of the squeak upstairs, so hopefully I will not be being joined by any unexpected guests arriving unconventionally from upstairs anytime soon!
Posted by April J Harris at 4:35 pm