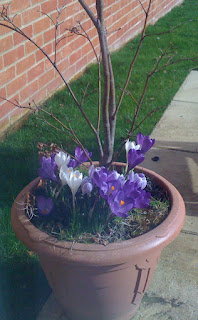 Ever since I read Sarah Ban Breathnach’s Simple Abundance nearly ten years ago, I have made it a point to cultivate what she describes as “an attitude of gratitude”. I must confess I do not keep an actual gratitude journal as she recommends, but I do make it a point to look for things to be grateful for throughout the day - whether it is something exciting or as simple as a lovely hot cup of tea.

Today was one of those gorgeous Spring days that just make your heart sing. It was not all that warm, but it was glorious nonetheless. It was a busy day though, with back to back commitments and more than a few jobs to do around the house. When I finally made my way out to the grocery store about four o’clock to do the shopping, I was more than a little frazzled, despite having just finished a yoga class.

Things did not improve after I got to the store. Unusually, it was not very well stocked with the things I had come for and because it was relatively late in the day, it was also rather crowded. I found myself in need of the ladies’ room, and found their facilities to be so dirty and unkempt I almost did not bother to go, but persuaded myself otherwise as it was a matter of urgency. By the time I had checked my groceries out, I was not feeling grateful for much of anything.

As I walked out into the car park, I noticed it was unusually busy. Cars were jostling for spaces, so much so that one virtually pushed me out of the way as I tried to negotiate my way to my car. The driver was so pushy that he would have driven right into my shopping trolley if I had not quickly pulled in out of the way right behind a car. I finally got turned round so that I could cross the road to my own car which was on the other side. It turns out someone had carelessly left an empty shopping trolley just behind my car and this was part of what was causing the cars to crowd the pedestrians. I now had my back to the car I had tucked in behind, but I had to wait to cross as yet more cars were streaming past me, trying to negotiate their way past the empty and abandoned shopping trolley left near my car.

Suddenly I felt an almighty thump all across my back, shoulders and bottom. It was quite painful and for a brief, dizzy moment I chastised myself for stepping back into the car I had tucked in behind. Then I looked behind me and saw the back window of the car was right up against me and the brake lights were lit up. It had backed into me, not the other way around. In shock, I crossed the road, opened the boot of my car and started to load my groceries in. The car that had hit me sat motionless as I did so. A passing lady stopped and said, “Are you alright? You just got hit by a car!” I looked at her, still stunned and said, “Yes, I think so, just a bit shocked.” I continued to load up the car. “Seriously,” she said, “are you sure you are alright? It hit you quite hard.” “Yes,” I replied, not at all sure that I was but feeling somewhat embarrassed, “but thank you for asking.” She carried on doubtfully and I looked quizzically across at the car that had hit me, which still sat motionless in the exact position it had been in after it hit me.

Finally, the driver pushed the door half way open, leaned out and said, “Are you okay?” Still in shock, I replied, “Well, you did back into me you know!” “Yes,” she confirmed, “I’m sorry about that. Are you okay?” I confirmed I was and she drove off. I watched as she reversed and realised I had been positioned squarely behind her, right in the middle of her fairly large back window. She had reversed without even looking.

It took me a few minutes to gather my thoughts and I sat in the car until I felt steady enough to drive home. At first I wondered why on earth something like that would happen, and turned the event over and over in my mind. I felt rather cross with the driver that hit me, particularly as she had not even bothered to get out of her car when she spoke to me, but oddly even more so with the pushy driver who had caused me to stand behind her out of the way in the first place. Then it occurred to me that perhaps it was time to stop being cross and consider just how lucky I was.

The car that hit me was reversing and thankfully doing so quite slowly. Although my shoulders and back were a little sore, I was not badly injured. What if it had been someone pushy who decided to reverse quickly? I would have been pushed into my shopping trolley and then out into traffic - and I certainly would not be driving myself home as I about to do. Also I am fit and well, and because of all the exercise I do, quite strong, so I was much better placed to absorb the bump I got than if I had been less so. Not only that, but in this day and age when people are reputedly rather an uncaring bunch, someone stopped to ask me if I was okay - and made sure I was before they carried on.

I realised that even in this situation, I had a lot to be grateful for. Meister Eckhart, a twelfth century German theologian said, “If the only prayer you ever say in your whole life is “thank you”, that would suffice.” I’m think that is a pretty good prayer for me to pray today!
Posted by April J Harris at 4:28 pm