Where Do The Weekends Go? 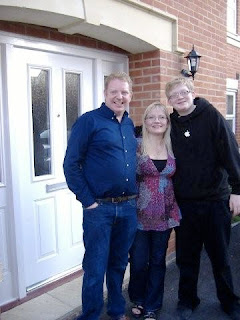 When the 21st Century Husband and I first met, weekends seemed to stretch on forever. I have no idea how, twenty years later, weekends can suddenly seem so short. It seems like three seconds ago it was Friday afternoon and I was looking forward to what is now practically over.

It seemed to be about the time that we became three, when the 21st Century Teenager (then the 21st Century Baby of course!) was born that things began to speed up. It was a slow process at first, this strange speeding up of the cosmos, but as time wore on, things seemed to move faster and faster. And one day we woke up living on the edge of suburbia, our baby was sixteen and weekends seemed to be about two minutes long.

I am reassured that we are not the only ones who seem to feel that weekends are shorter these days though. I think it is because we pack our lives so full of activity. Where weekends years ago used to be relaxed, unplanned expanses of time, now they are often planned with almost military precision in an effort to fit everything in. I still enjoy them though.

Take this weekend for instance. We had a relaxed morning at home on Saturday, tackling some of the closets in the 21st Century Household. This could have been stressful, but we decided to approach it with a new attitude and in the end it was incredibly satisfying. I actually found shoes I did not even remember I owned hiding in the back of one closet. They are virtually new and still in style - result! We spent a few hours in the afternoon at the gym and then a quiet evening at home en famille watching a film. Today we went to a friend’s 18th birthday celebration which was really lovely. We spent the afternoon amongst friends drinking champagne and toasting a wonderful chap on the cusp of adulthood with a million possibilities before him and a whole life to explore them.

So even though it disappeared too quickly, this weekend was wonderful. Part of the reason for this was that it was largely unplanned (with the exception of the wonderful birthday party which was something we all looked forward to). I do think we need to try not to plan so much. The trouble is there are so many interesting things we want to do, and lots of folks we want to see, and I do find if you don’t plan things in advance sometimes they just don’t happen. It’s striking a balance between planning a bit and not planning too much that I struggle with, and that I think almost everyone else we know does too. But if we can get the balance right, we can really take advantage of those two wonderful days known as the weekend.