"It Was Twenty Years Ago Today" 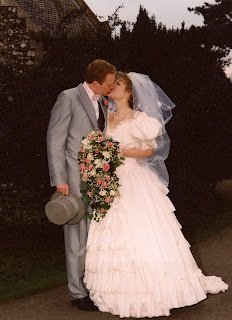 At an April Fool’s New Year’s Eve party (it’s better not to ask - even I’m not quite sure how to explain it), I met the 21st Century Husband for the first time. Of course, back then he was not the 21st Century anything - heck, none of us were. It was 1989. I had been invited to the party by my cousin, who suggested I might like to come along. As I had only been in England about three weeks, it seemed like a good way to get to know people. So I accepted her invitation.

The party was being held at the Sydenham Lawn Tennis Club. It sounded very posh, but I noted on my arrival that just because something sounds posh doesn’t mean it is! To be fair, I’m sure it was posh a long time before. I was wearing a blue dress, the height of 80’s fashion, and I was petrified. Part of the reason for this was that my cousin’s partner had driven us to the club and he was notorious for both the speed and erratic nature of his driving. Sadly I did not know this when I got in the car although I was terribly grateful for the lift. The other reason I was petrified was that I was in a room full of people, only three of which I actually knew - my two cousins, and my one cousin’s aforementioned partner. As the evening wore on, I found myself sitting with some people having a drink and trying not to feel quite so nervous. Suddenly the door swung open and two chaps walked in. They headed for the bar so quickly that by the time I saw them I could only see the backs of their heads. I found myself focussing on one of them. He was very tall and quite slim, with curly red hair, cut short. Suddenly, disconcertingly, I heard a voice in my head. Now, I’m not normally one to hear voices (and I hasten to add I have not heard any since!) but this one was loud and clear. What I heard was this. “That is the man you are going to marry.”

I was a bit taken aback by this apparent revelation, particularly as we had not at this stage even met. I had not even seen his face. I did not have long to wait to do so as before I knew it my cousin was approaching with him in tow. She introduced us, and in that moment I learned the true meaning of the words coup de foudre. I was lost, utterly besotted. It really was love at first sight. He hardly left my side all evening. The blue of his eyes in the moment when he extended his hand and asked me to dance for the first time is something I will remember forever.

Less than a month later, I moved in with him. We have been together ever since. I’m so grateful for the wonderful life changing event that happened twenty years ago today - and for the wonderful family that grew out of it.

George Sand wrote “There is only one happiness in life - to love and be loved”. I could not agree with her more.
Posted by April J Harris at 3:49 pm