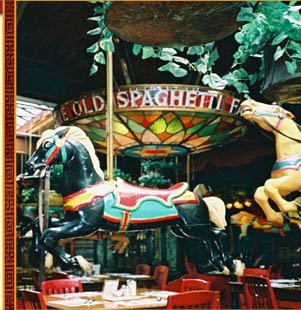 Back in 1971, a branch of the Old Spaghetti Factory opened in Toronto. It followed the format of previous branches in the West of Canada, located as it was in an old warehouse. The warehouse was filled with antiques - from an old carousel to an old street car (tram) - and then tables were scattered amongst them. Even the headboards and footboards from old beds were turned into booths. It was a magical place for a child to eat, and when I visited with my parents in the late seventies, I was completely enchanted. An added attraction was the food, which was delicious, plentiful and great value for money.

The 21st Century Husband, Teenager and I returned to the Old Spaghetti Factory at 54 The Esplanade in Toronto tonight and nearly thirty years after visits with my parents, nothing has changed. We had a wonderful evening, surrounded by fascinating souvenirs from Canada’s past. The food, from a menu offering so many choices it takes a pleasurable ages to decide what you would like to eat, was delicious. Generous main courses also included delicious soup or salad to start with, and yummy spumoni ice cream to finish. My veal milanese was scrumptious. The pasta was dressed in a tomato based mushroom and tarragon sauce that was simply delightful. Our waiter was friendly and efficient and we enjoyed a couple of hours at our table over some extremely nice food and drink.

It was lovely to feel I was stepping back in time. The Old Spaghetti Factory obviously believes in the adage, “if it ain’t broke, don’t fix it” and this has served them very well. The formula adopted in 1971 still works today and I highly recommend a visit to this wonderful emporium. It’s located just a couple blocks from Union Station and is a wonderful place to go with kids of all ages.
Posted by April J Harris at 8:34 am