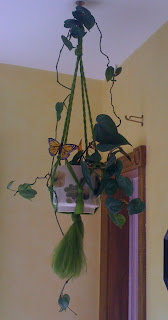 The plant in the photograph above is one of the first things I remember from when I was a child. I grew up seeing it entwined through a pretty screen that formed a separation between the entrance hall and the dining room in our house. In fact, it is older than I am.

The plant is actually made up of two plants. The first was given to my Mom at one of her wedding showers in the late fifties, and the second at a baby shower in the mid 1960’s. She potted them both together when my parents moved into their first house six months after I was born.

The plant thrived all through my childhood, with the ivy getting longer and longer. There was a brief time when it began to falter, but my Dad took a cutting which he later added back into the remaining plant, and everything was alright again. It survived a move to a new home when I was thirteen, and later my parents’ move from that house to an apartment. It saw me grow up, and was a silent witness to all the laughter we had in our house - lots of family gatherings and fun. It watched my parents grow old.

When we helped my parents move into a retirement home in 2007, the plant was beginning to look a little ragged round the edges. There was a long strand of stem without many leaves. We were all worried that it would not survive the move. I held it on my lap in the car as we drove to the home - and personally draped it round the picture my parents had over their sofa and over the screen door to their garden area.

Like my parents, the plant did not really like being in the retirement home. It began to fade away a bit, and the leaves fell off one of the main stems, leaving us with a fairly strong plant at the bottom, but a very worrying bit of plant at the end. When my Dad passed away, the plant was not doing very well at all, and when we had to move it to the new suite my Mom moved into after his death, I doubted whether it would survive. I carefully draped it round the room, trying to make things look like home. But for my Mom, nothing would ever be the same again.

It was the last thing I removed from the home after my Mom died. I walked out the door with it in my arms, feeling utterly bereft. My lovely cousins in Sarnia agreed to take care of for me. Sadly I could not take it home due to the restrictions on moving plant materials from one country to another. It was looking so fragile I told my cousin not to worry if it died, I just appreciated them looking after it for me.

Imagine my delight when I saw the plant again this week. Living with my cousins in Sarnia clearly suits it. It seems very happy there and is looking healthier than I have seen it look in years! My cousin had the courage to cut the long dying stem off it, and the remaining plant is thriving, with lots of wonderful new leaves starting.

I’m glad my old friend is living happily with people I am so fond of, and is doing so well. It’s nice to see it making a fresh start; it makes me feel happy to see that. After such a long time watching my parents suffer and mourning their loss, I feel a real sense of hope that I, like the plant, might now be able to start again. It’s about time.

My cousin has suggested the plant might benefit from re-potting and I agree. After nearly twenty years in the same pot, I’m sure its roots are desperate for a bit more space. It is time for it to move on and I’m really looking forward to seeing it thriving the next time we visit.
Posted by April J Harris at 12:11 am