A Bit At A Time 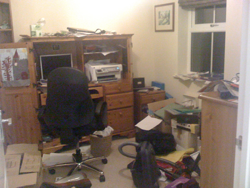 Remember the photograph above?  That is my cringe-worthy “before” picture from my blog on 11th February.  It is one I was worried about posting, as it more than casts my housewifery skills in a very bad light.  Having said that, I never claimed to be a “perfect housewife”.  In fact, that is the antithesis of my work as the 21st Century Housewife.

But I digress.  In case you did not read my blog on 11th February, the room above is the study in our house, and it became a bit of a dumping ground after we moved in.  Everything we did not know what to do with went into the study, particularly things that I needed to sort through after the deaths of both my parents.  Just as we were in the process of moving, my parents died within six weeks of one another.  That was about eighteen months ago, and every time I went in the study to try to sort things out, I’d end up in tears as I went through things that reminded me of their loss.  As a result, not much got done in there for a very long time.  So in February I decided to sort the room out, whatever it took and however long it took me.

Because of the emotional nature of the clutter I had accumulated in the room, I decided to be patient with myself and work away at my own pace.  It is because of this that I am only just now posting more photographs.  Sadly they are still not “after” photographs either.  These are the “half way there” photographs. 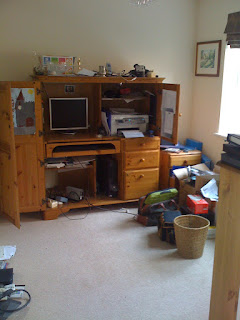 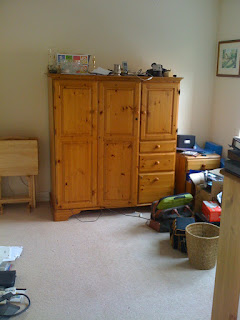 Despite this, I am rather proud of myself.  It took hours going through many of the boxes.  Also, as you can see from the photograph on the left, the desk is nearly clear enough to actually be used by the 21st Century Husband.  (This room is his study; I have a room upstairs we call the library that is my version of this room.  I love my library, but I’ll share more about that another day.)

You can’t really see it in the “before” photograph, but there was a display cabinet to the left of the desk (the edge of it is just showing in the left corner of the photograph above).  I moved that upstairs yesterday and it looks amazing in the master bedroom.  (Even that was a challenge as I had to go through all six of the drawers in the cabinet before I moved it!)  I’ve cleared out four big dustbin (garbage) bags full of paper in the last ten weeks, and that does not count the papers I had to shred!  I found nice places in our house to display many of the keepsakes that had belonged to my parents, took a few things I needed longer to sort through upstairs to the library (no that isn’t cheating, it’s just creative displacement!).  I also recycled over fifty magazines I had collected over the years.  (What was I thinking, hanging on to all those magazines!!) And that is before you get to the bookshelf which you cannot see in the right of the photograph - and which I promise to include pictures of next time!

The long and short of it is, this is very much a work in progress.  My purpose for sharing it with you is to emphasize that housewives like that so beautifully played by Marcia Cross in Desperate Housewives - the Bree Hodges of this world - are few and far between these days.  It is virtually impossible to have a tidy house all the time, and those of us who fall slightly - okay a long way - short of perfection on that score should never feel bad about ourselves because of it.

I also want to stress the importance of taking things slowly.  It is a bit like losing weight.  If you crash diet and the pounds fall off in a huge hurry, you will find that when you start eating again, they pile straight back on.  If you tidy everything up in a rush, putting things away willy nilly, not only will you never be able to find them again, but it’s a pretty strong likelihood that the room you have sorted out will be a disaster zone again before you know it.

So whatever room it is that is your nemesis - or even if there is more than one (hey, don’t look at me, I’ve confessed enough for one day!) - be encouraged.  Take it slow and steady, but do something about it.  I feel so much better - lighter somehow - having done what I have in the study.  Also, because I have done it over time, I am not feeling fed up with the job itself. In fact, I am actually beginning to enjoy it.  The feelings of sadness and dread I had are being slowly replaced by happy memories and a calm knowing that even though they have passed away, my parents are still very much a part of me and of our lives.

Who knew tidying up could be so therapeutic?