Taking Some Time Out 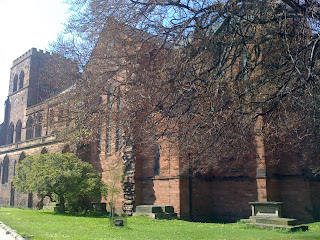 I got to the Abbey but was unable to go inside as it was shut! This was despite a sign saying it was open on Saturdays until 5.30pm - and it was only 4.30pm. Never mind, perhaps next time I will finally see the inside of this iconic building. We walked all the way around it and it was wonderful to finally have a really good look at the outside. 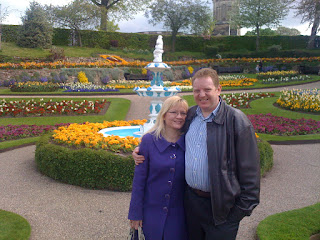 It was a brilliant weekend, with lots of sightseeing, relaxing and eating. This photo is the 21st Century Husband and I in the photograph in the Quarry - or The Dingle as it is known. It is an old quarry that was made into beautiful gardens. As you can see from my coat it did get chilly eventually, but the sunshine was out so it was beautiful.

We stayed in the Prince Rupert Hotel, so named as it used to be the home of King James I’s grandson, Prince Rupert, who was a keen supporter of Charles I. Parts of the building date from the 12th century so it is a very interesting place. We were in the ominously named “King Charles I Suite” which made me a tad nervous as of course King Charles was one of those members of the royal family whose story does not end happily. However the hotel is not even remotely spooky, being completely (but very sympathetically) re-done. It was an extremely nice place to stay and aside from the shower (which was the worst I have ever used!) the suite was lovely, although I was disappointed it was not one of the ones with a four poster bed. I’d recommend the Prince Rupert, but would suggest you plan on baths instead of showers unless you enjoy being alternately scalded and frozen. It is difficult to plumb old buildings I know, but I’ve stayed in older places with better showers!

It was so lovely to have a day or so to just potter around exploring. We stumbled on some fantastic little shops, including Juliet Chilton Flowers and Interiors which was a gorgeous treasure trove spread over several floors full of all sorts of furniture, curios and things to decorate with. Another favourite was Wysteria Lane, one of the most amazing shops I have ever been in. It is situated in an old house over four floors and each of the rooms is done up to suit the wares being sold in it. Menswear is in the basement, kitchen items are displayed in an actual kitchen and I was utterly taken with the display of outdoor items actually outside in the garden. 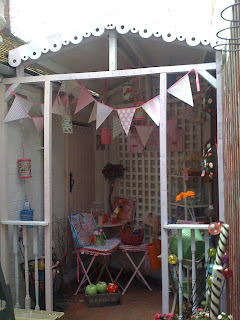 Venture upstairs and you will find rooms done up as walk in wardrobes with beautiful clothes, handbags and decorative items for bedrooms. There is a children’s room and lots more. It is a simply beautiful shop. I would love to have spent more time there.

We had two super meals in Shrewsbury which I will talk about more soon on my other blog, Recipes from the 21st Century Housewife’s Kitchen. I hope the photograph below wets your appetite! 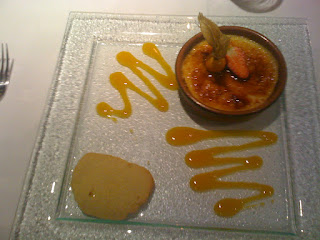 It was also lovely to catch up with our cousin Noel. I feel so grateful to have had a little break in the midst of all the chaos. Everything is so busy at the moment here in the 21st Century Household with impending exams, lots of things going on and busy professional lives as well, that sometimes we need reminding to slow down. Just in case your household is in a similar situation to ours let me remind you of it as well. In the words of William Henry Davies, “What is life if, full of care, we have no time to stand and stare?” It’s as true today as when he wrote it nearly a hundred years ago.

Do take some time out. Even if you cannot manage a whole weekend, try for a day or even a couple of hours. You will be very glad you did.
Posted by April J Harris at 9:18 am