An Afternoon in Henley-on-Thames 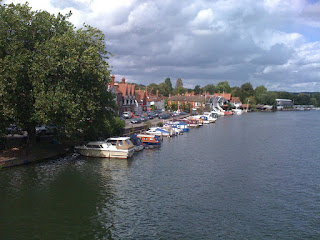 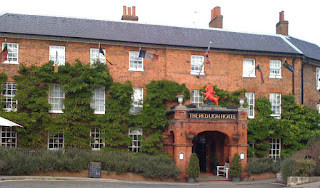 On Tuesday, it was enrolment day at my son’s college, so I dropped him off, and then spent a few hours wandering through the very pleasant little town of Henley-on-Thames. I wrote a blog entry about Henley in June (to read it, please click here) and said how much I was looking forward to going back to explore some more. It’s taken me all this time to get there, and it is only about a half hour’s drive away. Having said that, it has been a really busy summer!

Located on the banks of the Thames and just on the edge of the Chiltern Hills in Oxfordshire, Henley is full of beautiful scenery and architecture. The gardens are absolutely gorgeous (in fact Henley just won a Britain in Bloom award for the third year running) and I have yet to find a bit of Henley that is not just a little bit pretty - even the car parks have flowers in them!

It’s been a while since I wandered round anywhere on my own. I tend to seek out company most times, and recently any time I am on my own I seem to be rushing somewhere or other. So it was a refreshing thing to stroll down the High Street and along many little side streets, going into some of the very intriguing shops. There is not much you can’t find in Henley - from cookware to designer dresses, artisanal jewellery to art, there really is something for everyone. It is not often I go shopping without an express purpose in mind, so it was a real pleasure just to wander, trying on the odd thing here and there, but just really window shopping and browsing more than anything. If you get worn out, there are lots of places to stop for a coffee and a bit of refreshment - of course there is the ubiquitous Starbucks but there are also some very quaint little tea rooms.

At the end of the High Street you come to a very large bridge across the Thames and the view is quite stunning. I was lucky the weather was fine, and really enjoyed just standing and taking in the scenery.

Henley is more than just a pretty face. I’ve never known a small town to have so many festivals and things to do. There is the Henley Youth Festival in March, the Henley Food Festival in May and the Henley Regatta in July, followed by the Henley Festival of Music and the Arts. Later in July the Henley Show showcases agriculture and horticulture. There was an 80’s rewind music festival in August this year; performers included Kim Wilde, Belinda Carlisle, Rick Astley, Bananarama, Billy Ocean, Paul Young, ABC and Sister Sledge to name but a few. Every year in October much of the publishing world and keen readers alike attend the Henley Literary Festival. The Thames is a huge part of the life and culture of Henley, and rowing figures very prominently in the life of the town. There is even a River and Rowing Museum. If you are a fan of Kenneth Grahame’s The Wind in the Willows, there is a permanent display about it at the museum.

It’s no wonder house prices in Henley are higher than in the surrounding areas; it really is a gorgeous little jewel on the edge of the Chilterns. Having said that, I love where I live, but Henley sure is a wonderful place to visit.
Posted by April J Harris at 5:33 pm