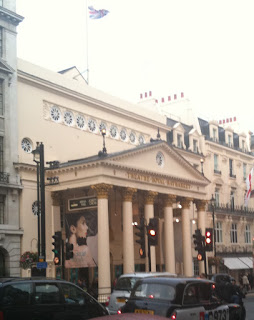 Wednesday night was the opening night of Breakfast at Tiffany’s at The Theatre Royal, Haymarket starring Anna Friel and Joseph Cross. It was the evening’s hot ticket, and we were invited.

It was a really interesting production - very different from the film and sadly, without a very happy ending. However the acting was extremely good, the sets wonderful and Holly Golightly’s costumes were just beautiful. This version of the story was a bit more jaded - there is no doubt as to Holly’s profession, whereas Audrey Hepburn’s portrayal in the film left it a bit more ambiguous. Then again, the film was made in the early sixties, when that kind of profession still was not openly discussed. The stage production is very much a different story for a different era.

I couldn’t say that I loved it. My son was not keen at all to be honest, despite a very open mind and a great love of the theatre. I thought that on many levels it was very good - perhaps not for diehard fans of the film - but it was entertaining and thought provoking. As to whether Truman Capote would approve, we’ll never know. Having said that, I understand he felt the film had been “toned down” too much to appeal to mass audiences, so perhaps he would have liked this version.

On the whole, I thought it was good, and certainly the acting was superb - so while it wasn’t what I expected, I am very glad to have had the opportunity to attend.
Posted by April J Harris at 8:29 pm