Inspiration from The Lettered Cottage 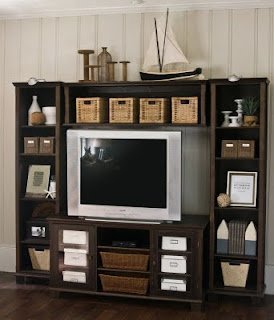 A few months ago I stumbled on a wonderful blog called The Lettered Cottage by a lady named Layla Palmer. She and her husband Kevin are renovating their home, a cottage in the United States. What Layla and Kevin have accomplished in their home (often on a tiny budget) is just amazing and the blog is utterly inspirational.

The photograph above is from a post from back in August about their entertainment unit (which you can see by clicking here). I read it then and thought how beautiful it was, but did not think much about it again until the other day. You see, we have some white hardwood units in our en-suite bathroom. One had been around for a while, but the other one was new - bought because the first little guy wasn’t big enough. Unfortunately, I just could not get my head round organising them and they both looked something like this. 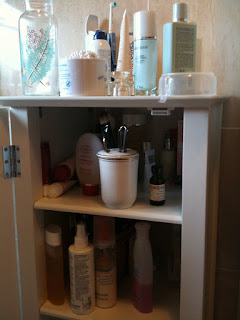 Now I could shut the door on that unit, but the taller one had open shelves (I’m not even going to post a photograph of those!) and I was utterly stuck as to how to make the whole thing as functional as possible but also really pleasing to the eye. Although it was just the master bedroom en-suite bathroom and not a room a lot of other folks come into, every time I walked into it the messy shelves made me cringe with embarrassment. It was definitely not the sort of thing you want to look at while having a relaxing bath.

Finally, the other morning, I remembered Layla’s post about her entertainment unit. Surely if she could use baskets like that, so could I. There was hope at last! So I ordered some water hyacinth woven baskets like this to fit the units... 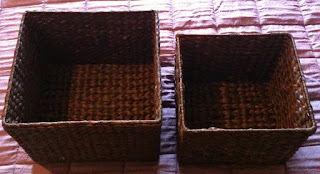 A few hours later and violà! My cabinets looked like this: - 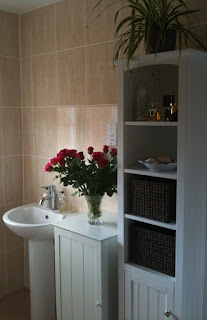 I’m sorry it isn't the best photo, but I had to stand in the bathtub to get these as it was! There are baskets on the shelves inside the sections with doors as well as on the visible shelves. Now there is a place for everything and everything has its place, plus I’ve had room for some fun stuff. The china dish of shells on the second shelf from the top contains happy memories from beaches all over the world, and the dish itself is from Keswick, in the English Lake District. I bought it on a family holiday with friends about ten years ago. The jar on the left of the top shelf originally held bath salts bought on a day out with my Mom when I was a little girl. I remember being so excited by the pretty jar with the sea blue crystals of bath salt in it. When it was empty we couldn’t bear to part with it so we washed it out and began using it to store cotton balls, a purpose for which we have used it ever since. It reminds me of my lovely Mom whenever I look at it.

Now, thanks to Layla’s inspiration, a room that was making me cringe is one that makes me smile.