Bank Holiday Monday- but not as we know it 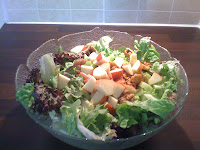 We woke up about 9am this morning. Guy misread the clock and thought it said 10am, but that was okay as it is always nice to have an extra hour. I made muffins from a mix for breakfast. I managed to find Betty Crocker Apple Cinnamon Muffin mix in Waitrose. It was quick and easy, and the muffins were delicious with a nice hot cup of tea. The weather people had predicted torrential rain for today, but actually we had quite a lot of sun and it is finally starting to get a bit warmer. Today was the first day the heating never came on at all.

Guy still had to work today, and is now preparing to go on a call that will probably last well into the early hours of tomorrow. However, we did manage to get quite a lot done despite that. We’ve put up loads of pictures and even the cuckoo clock, which has made it feel so much more like home. I’m desperately trying to clear the dining room and get everything organised as we have friends coming to stay next weekend. I’m so looking forward to seeing them, but I really want it to be ready, and my definition of ready is way more complicated than most other people’s. Where I write “ready”, I actually mean “perfect”. It’s not healthy, but it’s me.

Tonight for dinner I did pizza as I thought it would be easier. Also, as I am not really connected to that kind of meal, so if it is rushed or even if someone is on the phone while they are eating it (thank goodness that didn’t happen), I’m not hurt or upset. Waitrose do some really nice vegetarian pizzas, which are the only kind I ever really buy. We had their Fire Roasted Peppers Pizza which is always delicious. I do add grated mozzarella to top it off as I don’t think it has enough cheese, and on one of them I put lovely slices of beefsteak tomato on top before I added the extra cheese. Both were yummy. I do like to have a salad with pizza, and as we were not having any meat, I thought it would be a good idea to include nuts. I really fancied a Waldorf Salad, but did not want all the mayonnaisey richness of it so I decided to invent a lighter version. It was very successful, and I include it here.

Put the salad leaves in a large bowl and top with the chopped celery, chopped apples and walnuts. In a small lidded container, mix together the oil, vinegar, mustard and sugar. Put the lid on and shake vigorously. Pour over the salad. Toss and serve immediately.
Posted by April J Harris at 7:40 pm