Friday 23rd May - Chelsea Flower Show and The Lights of London 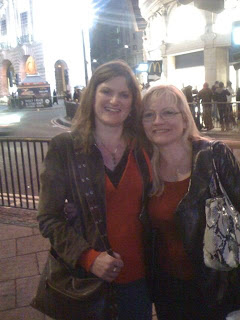 On Friday my wonderful friend Lesley (Lel) and I spent the day at Chelsea Flower Show. Guy dropped us off at Reading Station on Friday morning and we went into London by train.

Chelsea was amazing. Both Lel and I were concerned that it might be overcrowded and uncomfortable, but it was so well organised and everyone was so polite that you were able to see everything and yet never once feel pushed or squashed, despite the huge crowds. It was British organisation at its best and everyone knew how to queue which was wonderful.

The show gardens were beyond our wildest dreams, and our particular favourite was the George Harrison memorial garden. It started with an overgrown patch of grass on both sides, with a rusty bicycle leaning against a wall. In the middle, a mosaic path began with the Liverpool skyline. The mosaic then disintingrated into wild and exotic colours along the path, leading the eye through oceans of multicoloured flowers on either side, all the way up to a beautiful white pavilion. The canopy overtop was Indian in design and underneath there were very comfortable looking chairs and sofas, all wicker and white. To the left of the canopy, a water feature with a hologram of George himself in his hippy days - with a huge hat, long hair and an umbrella - made relaxing water noises in the background. It was idyllic. Of course the idea was that your eye journeyed through George's life from Liverpool, through psychedelia, all the way to the spirituality that marked his later life. But it was simply beautiful, and made you sigh just to look at it. All the show gardens had their own beauty though, and even the indoor pavillion had the most amazing displays.

The highlight of the day came quiet early on, when a BBC film crew appeared at one of the show gardens we were looking at. The very friendly producer explained that Alan Titchmarsh was going to be filming there. A buzz of excitement filled the crowd. Alan Titchmarsh is the rock star of the gardening world in England. Lel really wanted to meet him, so we waited to watch the filming. I've spoken to him before at the Gardener's World show at Birmingham. He is a lovely chap, really friendly with time for everyone. However I must confess I don't quite understand the depth of devotion some of his fans have. One young girl, who could not have been more than twenty, went on about how wonderful he was and sighed that she "just loves him". I'm always interested in watching anything to do with filming and television though, so I was quite happy to wait and watch. Luckily we were in the very front row, so we had a really good view. It was fun watching the shoot, and then at the end, Alan Titchmarsh went to head off, but was called over to where we were by Lel and another lady. Bless him, he came over and chatted, and even let me take a photograph of him with Lel. I was so pleased for her. He really is a lovely chap and absolutely made the day.

We headed off for more of Chelsea and had a fantastic time, buying plants and bulbs all to be delivered to us later in the year. We saw some incredible tulips, the like of which I have never seen before. I ordered some of them so should hopefully have a very unique display of tulips next spring. It's one of the nicest days I've had in ages, we had such a lot of fun.

We met Guy and Alex at the Apple Store in Regent Street at 5.30, and headed off for some London shopping. Then Guy treated us to dinner at a restaurant called Piccolino just off Regent Street. The staff were incredibly attentive, taking our shopping from us and seating us at the bar. We had a drink and then moved to our table for some of the nicest Italian food I have had in ages. We all had such a laugh. It was a great evening.

Before we set off for Paddington and the train back to Reading, we walked from Regent Street up to Piccadilly Circus, where we took the photograph above. You can see from our faces what fun we are having! London at night is such an amazing place. I do love it, and even now feel like I need to pinch myself when I realise that I live so close to a city I used to only dream of as a child.
Posted by April J Harris at 12:06 pm