Being a Very Proud Mum 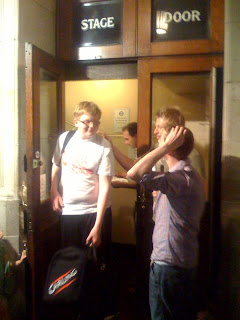 There’s Alex, above, leaving Her Majesty’s Theatre in London after the performance last night. It all went really well, and we were very proud of him. The whole cast did an amazing job.

Guy and I had a good day as well, and went out for a nice meal at Galileo’s, just opposite the theatre, before the show. I do wish Galileo’s would try a little harder though. It’s nice, but not exceptional, and we’ve always gone because of its proximity to the theatre. But I think we’ll go earlier next time and go somewhere a bit better.

I was so pleased to see Alex. I really did miss him. What was nice was that, although he was clearly sad to be leaving his friends, he was very pleased indeed to see us. And that made me feel really happy.

Bless him, Alex slept till after ten this morning. Since then he has been catching up with his friends here, and also on the phone . His friends from last week are calling – it’s nice they all miss each other already. As for me, I’ve been washing and ironing, and trying to get packed for our holiday to Florida. It’s not long to go now.

Tomorrow Alex and I are off to the Midlands to have lunch with our dear friend Alice – and then poor Alex has to have his braces tightened. The good news is the orthodontist says he only has about six months till he can get them off and have a retainer!