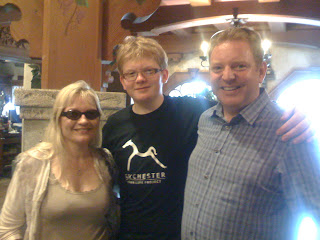 We headed back down to Florida on Thursday, driving through a bit of tropical storm Fay on the way, but arriving safely back at our hotel in Orlando in the late afternoon. We had dinner at The Olive Garden which was lovely.

Friday morning we went to Kennedy Space Centre. The last time I was at Kennedy I was just a few years younger than Alex is now, and I have to say it has changed nearly as much as I have. We took a “Behind the Scenes” tour which was fantastic. It showed us everything from the launch pads for the Space Shuttle to its landing strip, plus all the Apollo historical places as well. It really took me back to the days when Mom, Dad and I would all get up early to watch the Apollo launches, eating our breakfast on TV tables in front of the television. I was excited to learn that after the Space Shuttle programme finishes soon, they are starting a new programme in 2010 that will take us back to the moon, and beyond. I love space exploration! It’s so exciting. In fact, when I was a kid I always wanted to be an astronaut – until sadly my dreams were crushed by the spectre of motion sickness. It was a great day at Kennedy – we all loved it. I highly recommend it. There is so much to see and learn. You can do everything from experience a shuttle launch to having lunch with an astronaut. Also, the whole of the Space Centre is set within a wildlife refuge. We saw eagle’s nests, alligators, cranes, herons and even buzzards! I’d definitely go back again.

Today it was off to Sea World. It’s a wonderful place. They do a huge amount of wildlife rescue and conservation, and they have set the whole thing up so that you can see the animals in their natural habitats. They also arrange it so that you can see under the water as well as what is on top. It makes places like the Sea Life Centre seem very tame! You can also book loads of “experiences” where you can interact with the animals. We booked a Behind the Scenes dolphin tour, which allowed us access to the conservation areas, the medical areas and lots more. We even got to work with the trainers, interacting with and touching the dolphins. It was magical. The dolphins seem to just love people, and when it comes time for you to leave, they start jumping and squeaking to try and get your attention so you will come back. They are so gentle and incredibly affectionate. The tour was one of the most amazing experiences I have ever had, and Guy and Alex expressed similar sentiments. Later in the day, we fed sea lions and seals (who are friendly at first, but become very demanding and almost scream at you once they realise you’ve got food!), rode an incredible water roller coaster and even went to the arctic (on a ride, but we got to see real arctic animals in their actual habitats). All the animals are kept in large native environments and they are all visibly relaxed and happy- it is not even remotely zoo like. As for the Shamu Killer Whale show, it was just wonderful. The whales are so affectionate and clearly enjoy performing, and the trainers clearly love them to bits. Again, Sea World is a place I highly recommend.

Tonight, after a nice dinner at TGI Friday’s, we went to Friendly’s Ice Cream Parlour for dessert. It was such fun – we all go a huge kick out of it. Tomorrow it’s back to Disney…it’s a hard life!!
Posted by April J Harris at 11:29 pm